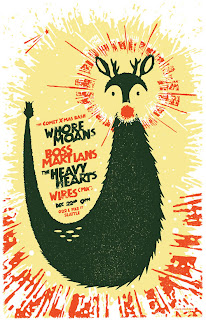 Being the consummate stage mother, er, girlfriend that I am, I relish those moments when Johann makes the papers because it gives me license to unabashedly brag about how fab he is - and he can't stop me. Ha!

Case in point: Mr. Gomez's poster for the Heavy Hearts show at the Comet this coming Saturday is this week's pick for The Stranger poster of the week. (It's the second time in a year that they've featured his work.)

Considering that inadvertently impaling one's self on a spike is of greater likelihood (and in some cases, less painful) than garnering a sincere compliment from any member of the Stranger staff, the fact that he received THE compliment and was further compared to his mentor, the legendary Art Chantry, is its own Stranger Christmas miracle. All that's missing is a little frankincense and myrrh...