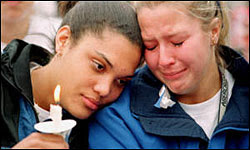 The day of the Columbine school shooting, April 20, 1999, is a day that will always live vividly for me. I worked as the office manager at a school for kids with special needs (Children's Institute for Learning Differences, Mercer Island, WA) and I learned of it from our development director who walked into the office, tears in her eyes and said, "It's happening again..."

Indeed, it was. It wasn't the first time an angry young man walked into his school or other public place and opened fire. What was so tragic about it was that our mission at the school in serving the fragile population that we did (which included kids with severe behavior problems the public schools were inadequately equipped to handle) was to help children learn not only the academics they needed to be successful in school but a way to handle their illnesses, their emotions and their truly bad days in a way that would help them succeed in the world. The day of Columbine was a blow to us. It provided a grotesque reminder of how much work there is still to do.

In hearing the story today of 19 year-old Robert A. Hawkins who killed at least eight people in a mall in Omaha, NE, I am reminded of the Oliver Stone film Natural Born Killers and its assertion that the media bestows an absurd amount of fame on murderers in our society, so many of whom become infamous legends in their own time. It was supposed to be a commentary. Instead, it became an inspiration for Dylan Klebold's and Eric Harris' rampage through Columbine High School. The satire was clearly lost on them.
Robert Hawkins' decision to "go out in style" yesterday may be due in part to the egregious amount of fame garnered by Klebold and Harris. They wore black trenchcoats, they listened to edgy music, they were part of a "mafia" and they carried bad-ass firearms. They certainly did have a "style" that might well be entrancing to other young men who have felt as alienated and powerless as they.
I understand that Hawkins was fired from his job yesterday, or the day before, and was angry. It may well have been the proverbial straw that broke the camel's back. I have a friend who also lives in the Midwest who was fired from his job yesterday, too. The difference between them is, as angry and devastated as my friend was about his lost job, he didn't go shooting up a mall about it.
That's what this is really about. There is a line that these young men who choose to kill cross, where they feel their pain and anger justify their horrific acts. But it does not and cannot...ever.
As I said after the Virginia Tech shootings, until we have not only an adequate health care system in place in this country that serves ALL citizens but also a mindset in our society not to ostracize or take pity on the mentally ill and emotionally fragile but, instead, to have compassion for them and care for them, we will continue to have more angry young men who feel they have no outlet for their fury and instability but to shoot up malls and schools.
We can decide to hear their cry for help or we can continue to be the victims of our own complacency. The choice is ours.
J.
Posted by Jamee at 9:28 AM