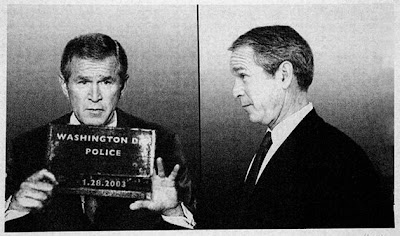 This controversial exhibit at the New York Public Library has drawn ire from local Republicans worried about traumatized schoolchildren and tax payer money.

"An exhibit at the main branch of the New York Public Library is drawing outrage from Republicans because some of the work on display depicts former and current members of the Bush administration posing for fake mug shots. Each official in the visionary series, called “Line Up”, is seen holding a slate with a date of arrest corresponding to a date when the official said something about Iraq that was not “reality-based.” said John Del Signore of Gothamist.

While I'm no fan of traumatizing the innocent schoolchildren who frequent the NYPL, I still say they have a right to know that not everyone condones the actions of the president (and others) and that it is absolutely appropriate to speak out against a leader who's behavior is seen by many to be criminal. If we are too busy being P.C. to teach our children to stand up for what is right, there will only be more George W. Bushes in our future. And that's more frightening than any doctored-up mugshot.
J.
Posted by Jamee at 1:07 PM